This page will be updated to include snippets from their new families as available. 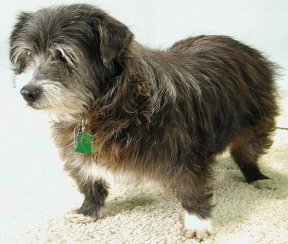 Cisco is a 7-ish terrier mix. He was found as a stray in Oklahoma, roaming around near a truck stop. He caught a ride back to Michigan with a friendly trucker. Poor 'lil dude had ticks, curled under toenails, and was in serious need of a bath!

Cisco had a cough, and has been diagnosed with a slightly enlarged heart, and a collapsing trachea. He's on a low dose heart medication, and has improved greatly! He loves to go for walks, and likes to sleep in his crate on a soft, cushy dog bed. 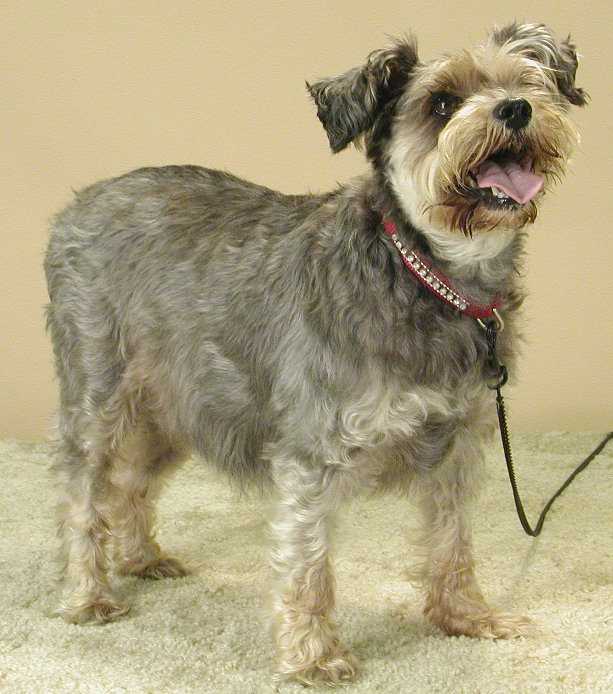 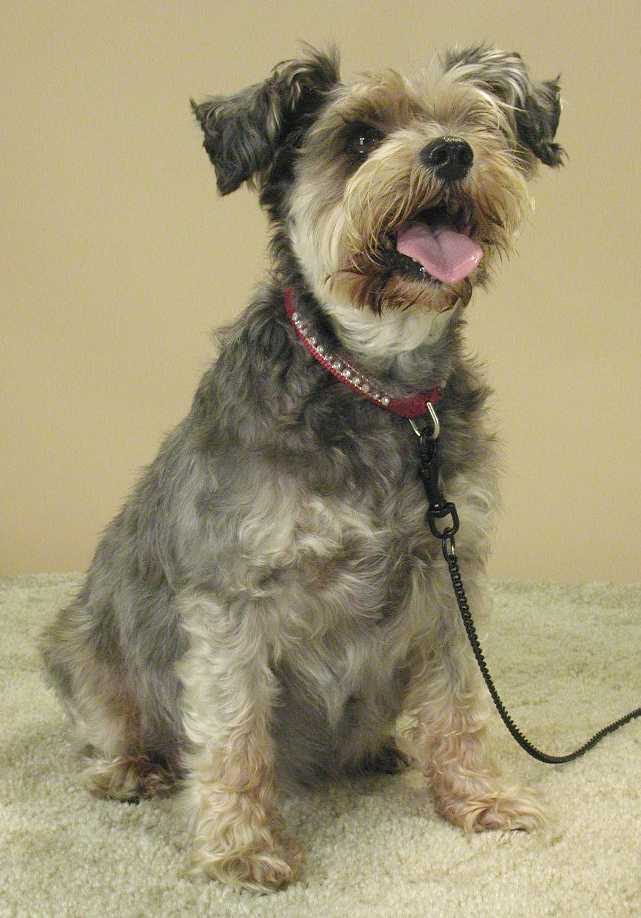 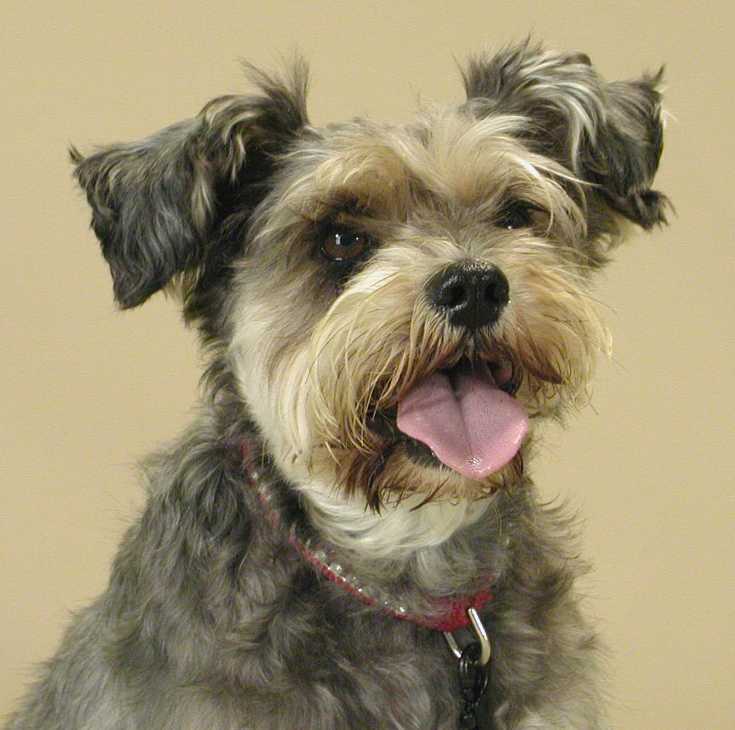 PJ is a 7-ish miniature schnauzer who was turned in to a shelter by her owners. No reason was given, and we really don't understand. This 'lil lady is Miss Personality with a capital P!

PJ has, shall we say, a bit of a weight problem. When she came, she weighed about 30lbs, and should weigh 20-22lbs; she also had slightly elevated liver enzymes. So, she's on a reducing diet. She was tested for Cushings to see if there is a medical reason for her weight, and tests were negative! PJ's liver enzymes are back to normal, and she's lost 3lbs! Her current weight is down to 26.4lbs! 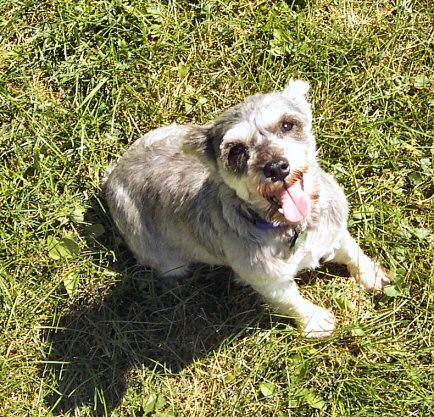 Dotti is a 7 year old miniature schnauzer who was rescued from a puppy mill. She's a former "puppy mill mama", who wasn't wanted anymore. She's SWEET....very shy, but wants attention so she'll creep over quietly to get her chin scratched. Dotti was doing very well on housebreaking, but has backslid lately - she was recently spayed, and had a large hernia repaired at the same time. This sweet girl has become a LOT more pushy about seeking out attention - what a doll! Her mask is lovely, and once her beard grows out she's going to be a gorgeous girl! Dotti's housebreaking continues to improve - she's doing well, if kept on a schedule!

Toni is a 2 year old miniature schnauzer, another puppy mill rescue. She appears to have been recently spayed when she was rescued, and probably couldn't be used for breeding any longer. Toni's name should have been Curious George! She's constantly looking on shelves, in cabinets, and on things to see what's new and exciting. Toni is much more skittish than Dotti - she'll RUN over to give you kisses, and run off if you reach for her. She likes to playbow and then take off with the other dogs, and she's started playing "bitey face" with Jackson on a regular basis. Toni's had her teeth cleaned, and is ready to look for a new home! Her new family will need to be committed to continuing to train her - she gets very frantic, barking and growling, when strangers come in. She bolts when afraid, and won't potty on a leash, so she needs a securely fenced yard.

Hans is a 6-7 year old miniature schnauzer, rescued from a puppy mill. He's a very nice boy, seems to be quite mellow, and coming along well with housebreaking. He likes affection, and isn't shy about asking for it, but he isn't pushy either. Hans does mark, and will be neutered (and have his awful teeth cleaned) on August 11th. Other than marking, Hans appears to be mostly housebroken. Update - Hans was neutered, and lost a bunch of teeth in his dental cleaning - but he BOUNCED out of the vet clinic! Those teeth must really have been bothering him! He's recovering now, and will be looking for a new home! Hans has begun to play a bit more with the other dogs, and has REALLY started to look for affection. We've discovered he's terribly camera shy, though - getting pics was a real challenge!

This little girl is sweetness on 4 legs! She's a 7 year old miniature schnauzer, also rescued from a puppy mill. She was spayed and had a hernia repaired - same day as Dotti! Mandy is a darling 'lil girl - VERY affectionate with people. Her 'lil tail wiggles every time someone pays attention to her, and she LOVES to be petted. She's not yet housebroken - that's going to be a challenge, as she seems to have some difficulty "getting" it.

Teddie is a 5 year old miniature schnauzer who came to us from a puppy mill. She's not feeling great right now, as she was just spayed and lost some teeth in a dental cleaning. But, she's a very sweet girl, with a wiggly little tail. Teddie is crate trained, and housebroken if kept on a schedule. She's great with other dogs - cats are unknown. (Nick's her buddy!) She'll be healed and looking for a new home soon!!

Chet is an 8-9 year old miniature schnauzer, albeit a larger one. He came from a shelter as a stray, and weighs in at about 30lbs. Chet is a very sweet boy - when he came to us, he was a huge hairball. On giving him a haircut, we found a ton of old and new sores under his coat. His back is now almost completely healed, his coat is coming in, and he's like a different dog. Chet is housebroken, crate trained, and gets along well with other dogs. He's begun to display quite the personality since he's feeling better, and will make someone a truly wonderful companion.

Jake is quite a change of pace for the Schnauzerama household. He's a 3 year old shih tzu, and he came from the same puppy mill in Indiana that Nick was rescued from. Grooming this 'lil guy was quite the challenge - one that spanned over 3 hours. Jake was a very good boy, though, even thru all the cutting and combing and trimming. He's not terribly fond of baths, though! Jake is crate trained, and mostly housebroken - he does well if kept on a schedule. He doesn't appear to prefer kids, and would do best in an adult household. Jake is fine with other dogs, but doesn't play with them - we don't know about cats.

Katie is one of the most awesome dogs that I've ever fostered. She was actually one day past her "due date", and would have been euthanized or sold to research. One of our volunteers got a reprieve for an extra day, and Katie was free!! This fabulous girl is a one year old mix of some kind of terrier - we have no idea what, but she's a doll! Katie is housebroken, crate trained, plays well with other dogs, and considers the squirrels to be VARMITS to be chased and destroyed! (So far, she hasn't achieved her goal of actually catching one....) Due to her avid pursuit of squirrels, a home with cats is probably a bad idea. Katie loves kids of all ages, too, and is looking for a great new home!!

Russell is a ~13 week old poodle puppy - talk about a change of canine scenery!! He recently had surgery for a PDA, and needs to be kept calm and quiet for the next few weeks to recover. This is much more difficult than it sounds - this 'lil bundle of fluff desperately wants to PLAY with the other dogs! For more info on the condition of PDA, and its treatment, click here.

Chip is a ~3 year old German Shepard/Chesapeke Bay Retriever mix. He was originally adopted from APB as a pup, and was had extensive surgery on one of his rear legs. His previous "owners" slammed his leg in a door, and didn't have it treated. Sadly, Chip had to be returned when his family's life took a turn for the worse. Chip is housebroken, crate trained, great with other dogs and cats, and loves kids of all ages! But, no one is completely perfect, right? Chip is overweight, and is currently on a strict diet to shed some unwanted pounds. Given the past history with his leg, carrying extra poundage isn't good for him!

Missy is a 10 year old schnauzer, rescued from a puppy mill. This 'lil girl is sweet with a capital S!!! She loves people, loves to be petted, and loves to snuggle! She's crate trained, and won't potty in her crate - we're working on housebreaking! Missy is fine with other dogs, and has just begun to play with them a little bit. She does get along with cats, but will bark at them on occasion.

Nick is a 7 year old schnauzer, rescued from a puppy mill. He's a very sweet boy, somewhat shy with new people....and a total goof! Nick had no idea that he could actually leave his crate - he'd stand there with his front feet out, but acting like his back feet were set in cement. And, we're still working on the challenge of going up and down stairs. Nick has a wonderfully soft coat - other than a small amount of marking when he came, he's housebroken, and crate trained, too. He's looking for a new home who will be patient with him, and will continue working on those scary stairs! Nick thrives on a routine, and his new home will need to be patient with him while he learns a new routine in their home. He does well with other dogs, but doesn't "play", and ignores cats.

Jack is Missy's "brother" - they were rescued from the same puppy mill. He's 8 years old, very sweet, and quite a bit shyer than Missy. He comes up to people for attention, but will crawl on his belly when he gets close, because he's scared. Jack lost ALL of his teeth except his canines in a dental cleaning - but, the concept of "no more teeth" hasn't made a dent! He eats regular food, makes an attempt to chew on bones, and loves to carry stuffed toys around! He's fine with other dogs, but doesn't play yet - we don't know how he is around cats. He's crate trained, and we're working on housebreaking. Jack picked up a urinary infection after being neutered, and will be available for adoption when he's finished his current course of antibiotics.

Lottie is a ~5 year old golden retriever, found running stray in the Grand Rapids area. Somewhere in the past, she injured her rear leg, and it wasn't treated - x-rays indicate it was a break that was never set properly. So, she walks with a limp - her foster mom started her on MSM and glucosamine, and she's begun to use the leg more! Unfortunately, Lottie is also heartworm positive, and begins treatment on January 12th. This sweet lady needs all of the good thoughts she can get! She's housebroken, and crate trained - but would rather sleep on the couch! She's fine with other dogs, and we don't know how she is with cats.